A Tragedy That Touches Us All

Sometimes things happen that stop you in your tracks and instantly pull you through the superficial into the reality of life's drama.

On Thursday night, November 15, I was sitting in my den comparing work days with my wife, Mary Anne.  Our TV was on the news but was muted so we could talk.  We both saw the map of Texas appear, showing Midland with the caption "Train Wreck" or "Train Accident" or whatever it said.  We continued our conversation without a comment about the image we had just seen.

Within 10 minutes, I heard my phone's Anchors Aweigh ringtone upstairs, but didn't go after it.  There would be time later to see who called.

When I looked at the phone a little later, there was a text from our vice president, Billy Hodges, that said, "Call me ASAP."  I thought one of our planned hunts had a glitch we would need to work out.

Billy's first words were, "It isn't us!"

Then he told me what happened in Midland.

Mary Anne reacted to my side of the conversation as she heard me repeat what I was hearing:  "four dead" and "17 injured" and "was it the Show of Support group?" and "how did it happen?"

After I hung up from Billy, I shook my head one final time and started thinking about what is next.

It's About the Warriors

Right now, everyone's focus should be on the families not on the tragedy of the event.  Military families see tragedy all too often.  Whether it happens to their family directly or to other service families, it is, unfortunately, part of life when your chosen path places you in harm's way.

Any tragedy deserves attention, but when it happens to those who have already given so much, and to have it happen in such a random fashion during a patriotic celebration of the American Spirit, creates an irony that makes this a very bitter pill to swallow.  The question is can we turn the intensity of this event into a positive force to benefit our wounded warriors?

Starting tomorrow, media coverage will concentrate on who, what, when, where, why, and how.  That is Journalism 101.  The blame game and finger pointing will start and, for a week, this will be big news.  It will then fade into periodic 30-second spots or two-paragraph fillers as more details come out.  Within a month, the "story" will be old news, only to be resurrected if a scandal is uncovered or "created."

The real story is our warriors and their families deserve our respect, appreciation, and ongoing support to repay, in some small measure, their sacrifices.  The story is there are dozens and dozens of organizations that step up every day to make sure our warrior families get much-needed care.  The story is many of our wounded are going to stay wounded, either physically or with wounds to their peace-of-mind.  The story is they, and those who came before, should never be forgotten.

The story that needs to come out is there are many organizations doing something about "it."  Patriots and Heroes Outdoors and The Link-Up are just two of dozens of like-minded groups that create opportunities for wounded warrior families to enjoy outdoor activities.  There are many groups that focus on the emotional challenges, others that offer financial advice and refining job search skills.  Many corporations are stepping up to be counted.  This is the story that should capture the nation's attention. 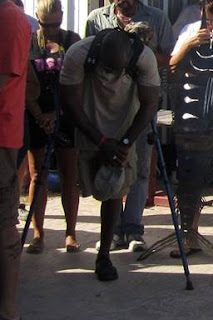 The good people of Midland, Texas are going to face a lot of scrutiny at a time when they are most vulnerable.  I hope their real story of patriotism and commitment doesn't get lost in the process because it is also your and my story and it needs to be told.
Posted by Patriots and Heroes Outdoors, Rod Jay, President at 1:51 PM